Once Owned By The 400 Wealthies Families In The World, And Hidden From The General Public, The Book of Wealth is Now Available To Anyone!

The Book of Wealth was initially published in 1895 in a limited number of 400 sets. Bancroft distributed the book to the wealthiest people in the western world such as the Morgan's, the Rothschild's, the Rockefellers, the Vanderbilts, the Kennedy's, the Carnegies, the Fricks, the Fords, and the list goes on.

That's right, up until now, the only people who have ever owned The Book of Wealth, has been the Global Elite. It makes sense that the only way to gain access to this amazing book was to be born into one of these wealthy and privileged families.

The Book of Wealth

This book was originally sold at a cost of $2,500 per copy for the cygne noir edition. The second or fin de siecle edition cost $1,000 per copy. By today's standards, The Book of Wealth would cost 25 times as much as it did back in the day! Adjusted for today's inflation, this book would cost more than $63,600!

Infact The Book of Wealth can rarely be spotted at auctions, however when that does happen, the price is astronomical, and can even reach up to a million US dollars!

Perhaps the reason for its scarcity is the value of the knowledge it contains. Not only has it been used by the world's richest individuals and families, but also by a number of the modern day motivational speakers and wealth creators.

The book created, and is the foundation, of the modern Wealth Attraction genre. Indeed leading motivational speakers such as Dr. Demartini have used The Book of Wealth as part of modern approaches to achievement, from the famous movie/book "The Secret" to other "The Law of Attraction" philosophies.

Here is what he has to say about this powerful book:

Hubert Bancroft who was a prolific American publisher and historian, set out to chronicle and analyze every significant example of financial success in recorded history, aided by an unprecedented research team. The result: "The Book of Wealth" - "[dealing] with all that is worth knowing concerning wealth, from the dawn of history to Joe Leiter's wheat deal."

Bancroft describes his monumental 10-volume set of books as "An Inquiry into the Nature and Distribution of the World's Resources and Riches, and a History of the Origin and Influence of Property, its Possession, Accumulation and disposition in all Ages and among all Nations."

Every notable example of wealth up to 1898 is sought out, examined and broken down to profound understandings - from pre-civilization, to history's greats, to those alive in Bancroft's time.

It analyzes common traits of wealth creation and the factors common to kings, countries, businessmen and companies who achieved a massive acquisition of wealth in their lifetimes and left lasting legacies behind.

At 10 volumes, The Book of Wealth is more substantial than any other Wealth Attraction media ever, with rigor and detail unmatched anywhere. Among gurus, it's THE defining text on wealth attraction, and a well kept secret that only John DeMartini has referred to on occasion. Still, "The Book's" ideas and approaches appear regularly (known to be watered down) in all modern Wealth Attraction. It is impossible to explain the influence, magnitude and rigor of this book, even today.

The Book of Wealth is once again available for purchase! 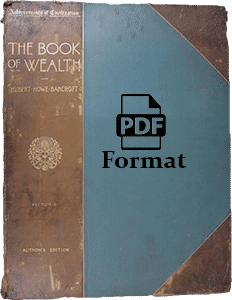 The Book of Wealth, containing all 10 volumes, has been reproduced in .pdf format.

It is e-mailed to you in PDF format upon purchase.

If you are wondering about the quality of the books, you can view a free sample of random pages here: The Book of Wealth Sample

*You will be emailed with the download links as soon as you have completed the PayPal checkout process. An automated email will be sent to your PayPal primary email address. If you do not receive this email within a few minutes of your payment, then please check your spam/junk folder first before contacting us at: bookofwealth@gmail.com

Earnings Disclaimer: We don't believe in get rich programs - only in hard work, adding value and serving others. Our programs are intended to help you share your message with a wider audience and to make a difference in the world while growing your business. As stipulated by law, we can not and do not make any guarantees about your ability to get results or earn any money with our ideas, information, tools or strategies. We don't know you and, besides, your results in life are up to you. Agreed? We just want to help by giving great content, direction and strategies that move you forward, faster. Nothing on this page or any of our websites is a promise or guarantee of future earnings. Any financial numbers referenced here, or on any of our sites, are simply estimates or projections, and should not be considered exact, actual or as a promise of potential earnings - all numbers are illustrative only. Anyway, all of our terms, privacy policies and disclaimers for all of our programs and events can be accessed via the link below. We think these disclaimers are important and we post them because it's the right thing to do. Thanks for stopping by. Until next time, live fully, love openly, and make a difference today. Contact Email: bookofwealth@gmail.com Earning Discliamers, Privacy Policy and Terms

Copyright 2016 - The Book of Wealth - All Rights Reserved